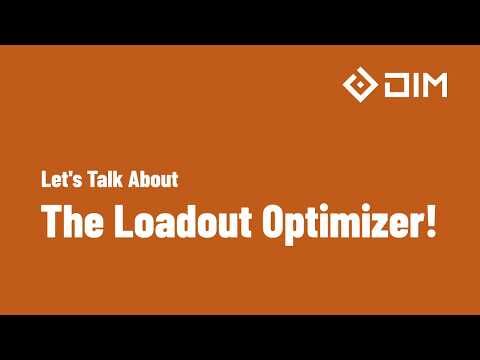 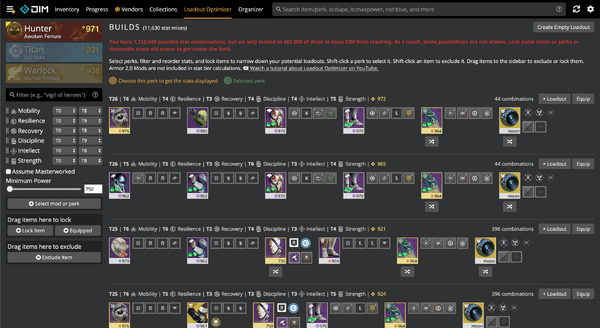 DIM's Loadout Optimizer is a power tool designed to help you pick out the perfect set of armor for a particular goal. It helps you maximize stats while taking into account the mods and perks you want to use.

First, make sure to select the character you want to build a loadout for by clicking their nameplate.

The Loadout Optimizer works on a concept called "stat mixes". Each row of armor you see represents a bunch of different possible loadouts that all reach the same mix of stat tiers. The "tier" of a stat is just the actual stat value divided by 10 - each 10 full stat points raises your loadout's tier by one, and each tier reduces some cooldown by a set amount. You can see how many possible ways you can reach the same stat mix from the label that says "XX combinations". By default, the combination that produces the highest power level is shown, but you can choose alternate pieces of armor by clicking the ⤭ button underneath the piece.

DIM works on stat mixes for two reasons. One is because if we made combinations based on unique stat values instead of tiers, there would be millions of possibilities, and the tool would be too slow and crash. Second, it doesn't actually matter if you're at the top or the bottom of a tier - if you can't make it to the next tier, the cooldowns will be the same. And if you can, the Loadout Optimizer will have a build for that higher tier.

To keep the page from crashing, DIM limits the number of possibilities it'll calculate to 500,000. Generally those will be the highest-stat mixes, so it's OK, but you should start filtering the combinations to narrow in on your perfect build anyway, which will reduce the number of combinations.

You can click the "+ Loadout" button on any stat mix to open the loadout editor pre-filled with those armor pieces. If you save that loadout, you can then apply it from the inventory screen. You can also hit "Equip" to immediately equip the armor and try it out.

When building stat mixes, the Loadout Optimizer only considers the armor's base stats - stats without considering any existing mods or masterworking on the item. If you want, you can check "Assume Masterworked" in the filter bar to consider every item masterworked, which will add +2 to every stat. If you want to build sets that rely on mods for stat boosts, you should lock the mods you want using the filter bar, and then those mods' stat bonuses will be included in the calculated stat mixes. 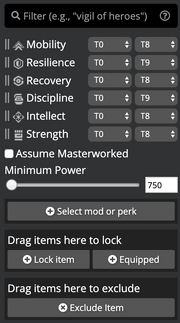 The real power of the Loadout Optimizer comes from the filter bar on the left side of the screen, which lets you tell the Optimizer what you're looking for. It consists of several subsections that let you narrow down the possibilities.

You can enter any item search term into the filter (either here or in the header) and the possibilities will be limited to match your search. Helpfully, if the search wouldn't match any items in a category of items (for example, there were no matching helmets for a search of perk:"Light Reactor") then the filter doesn't apply to that category.

Some good example searches are not:exotic to exclude all exotic armor, tag:favorite to include only your favorite items, or "vigil of heroes" to build a loadout based on an armor set.

You can limit the tier range of stats using the stat filters. Each stat can have a minimum or maximum tier. Play with these to try hit the mix you're looking for - for example, a Hunter build might be looking for the highest Mobility possible, so you can set the minimum Mobility to weed out builds you don't want.

You can also rearrange the priority of stats by dragging and dropping (grab the ∥ symbol or the stat name) the stats. This changes the order that stat mixes of the same total tier get displayed. So if you drag Mobility to the top, then amongst all your T26 builds, the ones with the highest Mobility will be shown first.

You can also choose "Ignore" in the stat dropdowns (either under Max or Min, it doesn't matter). Choosing "Ignore" for a stat will exclude it from the total tier calculation entirely. This lets you find builds that maximize a subset of stats without being influenced at all by the stats you ignore.

You may have some sets that have high stats, but low power, and while you can always infuse, you might be looking to go into an activity that requires higher power right away. You can drag the slider for "Minimum Power" to exclude low-power combinations.

Great loadouts require a good choice of mods. By default, Loadout Optimizer ignores all the mods that are already on your items. You can choose the mods you want by clicking "Select Mod or Perk" and choosing the mods you want. When you choose a mod, that mod's stat bonuses are applied to the armor pieces it goes on, and armor is automatically filtered to match the mod slot and element that are required to slot that mod.

Perks work similarly, but on Armor 1.0 items. They filter the results down to items that have that particular perk. This is especially useful for things like Ghost Shells.

Finally, you can both lock and exclude specific items. By locking an item, you are making sure that your loadout will include that item. This is also great for reducing the possibilities DIM has to work with. By excluding an item, you make sure that no loadout will include that item. You can quickly exclude an item by shift-clicking it, and you can drag and drop any item onto the include or exclude boxes to add it to that filter.

Retrieved from "https://destinyitemmanager.fandom.com/wiki/Loadout_Optimizer?oldid=217"
Community content is available under CC-BY-SA unless otherwise noted.